Our recently launched Global Solutions division specializes in point-to-point transport services for mission critical and disaster recovery circuits connecting Sarnia-Lambton to the rest of the world. 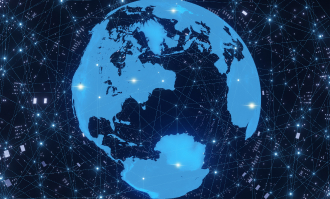 Our recently launched Global Solutions division specializes in point-to-point transport services for mission critical and disaster recovery circuits connecting Sarnia-Lambton to the rest of the world. How can we do that? In the “About Us” section of the website you may have noticed that we have over 100 years of delivering electricity safely, reliably and effectively in our DNA. You may also recall that we realized early on that we simply could not achieve the digital transformation we desired for our Bluewater Power Group of Companies with what the local carriers had to offer. Certainly not with their “best effort” service delivery and astronomical pricing models that most employ when they have the monopoly of a region like southwestern Ontario.

Once we were almost fully launched and had more than 80% of the local commercial and industrial areas blanketed with state-of-the-art fibre backbone, the next logical step was to start discussions with major enterprise customers in our region.  We wanted to fully understand their connectivity needs and their pain points, if any. Did you know 6 of the 15 largest chemical manufacturing companies in the world have an operating facility in Sarnia-Lambton? You see the first North American oil well was discovered in southwestern Ontario in 1852. This discovery spurred a global transportation industry and led to the creation of one of the largest oil and gas refining clusters and petrochemical manufacturing complexes in the world. It turned out that even these major enterprise customers were struggling with limited options as well.

Through our research we found that this class of enterprise customers were looking for more primary and redundant route diversity to locations in the southern USA and Europe. Also, they felt that local carriers did not have the understanding or the ability to deliver mission critical network services. With that information we soon made the decision to build a new international crossing between Sarnia, Ontario and Port Huron, Michigan to expand our reach.

All connected to a local Data Centre and operated by our 24/7 NOC.

This new network infrastructure between Toronto and Chicago has made Sarnia a junction point for global networks providing the southwestern Ontario with direct access into Chicago, Los Angeles, Seattle, Tokyo, London and other locations.

This network was designed to solve 3 problems as a new, non-incumbent route that completely avoids 151 Front Street (Toronto) and 350 E. Cermak (Chicago). The path provides direct cross-border connectivity from 45 Parliament, Toronto, and Sarnia, ON to 427 S LaSalle, Chicago, IL with multiple access points throughout Ontario and within the States of Michigan, Indiana, and Illinois.

First and foremost to offer mid-span solutions to customers that the current long haul networks between Chicago and Toronto left behind. Customers in the automotive, advanced manufacturing fields as well as Ontario’s technology hub in Kitchener-Waterloo.

Secondly, it was built entirely diverse from the long haul networks that exist today between Toronto and Chicago, two if the largest hubs in the world.

And lastly, with breakouts in central Michigan, our network can connect anywhere in Canada to anywhere in the US and Mexico all the while avoid major chock points like Chicago, Southbend, Detroit, Southfield, Buffalo and Toronto.

Benefits to the Route